Hispanic music of the 17th and early 18th centuries by master composers Juan Hidalgo, Juan de Návas, José Marín, Cristóbal Galán and others. Colorful Spanish and Latin American dances and songs of nature, birds, the sea, wind and the forest, depict the pleasures and treacheries of love; and villancicos and devotional airs – the oldest surviving source of music produced in these regions – illustrate the national identities of these regions.
The most popular forms in Hispanic early Baroque music were the tono humano and tono divino, secular and sacred songs or airs. They were essential elements at social gatherings and religious festivities as theater, domestic and devotional music. Colombian native soprano Camila Parias brings a versatile and unique tone of voice to this repertoire. The diversity of timbres of the instrumental ensemble accompanying  her – a violin, a viola da gamba, a Baroque harp, a Baroque guitar and theorbo, a virginal and an organ –  illustrate the richness of the “human passions ” that this music evoques. Some of the titles of the tonos and villancicos speak for themselves:  “Rompa el aire en suspiros” (The air breaks out in sighs), “Pajarillo que bien cantas ausente” (Little bird, your song in absence), “La Borrachita de Amor” (The little drunk lover), “Pajarito que en el aire elevado” (Little bird, soaring high in the air) and “Nace la aurora divina” (The divine dawn is born) – among others.

What is Crescendo At Home?

Now you can watch Crescendo’s concerts at home at any time with our virtual concert portal – Crescendo at Home!

We want to keep choral and baroque music experiences alive not only during the pandemic, but also for your pleasure, comfort and for anyone who is not able to attend concerts in person.

Recorded in high quality audio by former Carnegie Hall engineer Leszek Wojcik, and filmed in high definition by Charlette Media Productions, we offer you an experience that is similar to being there in person. It even brings you closer to the performers than you ever would in a live concert.

Watch, and share with your family and friends!  Subscribe to our e-Newsletter for news on upcoming Crescendo at Home programming. 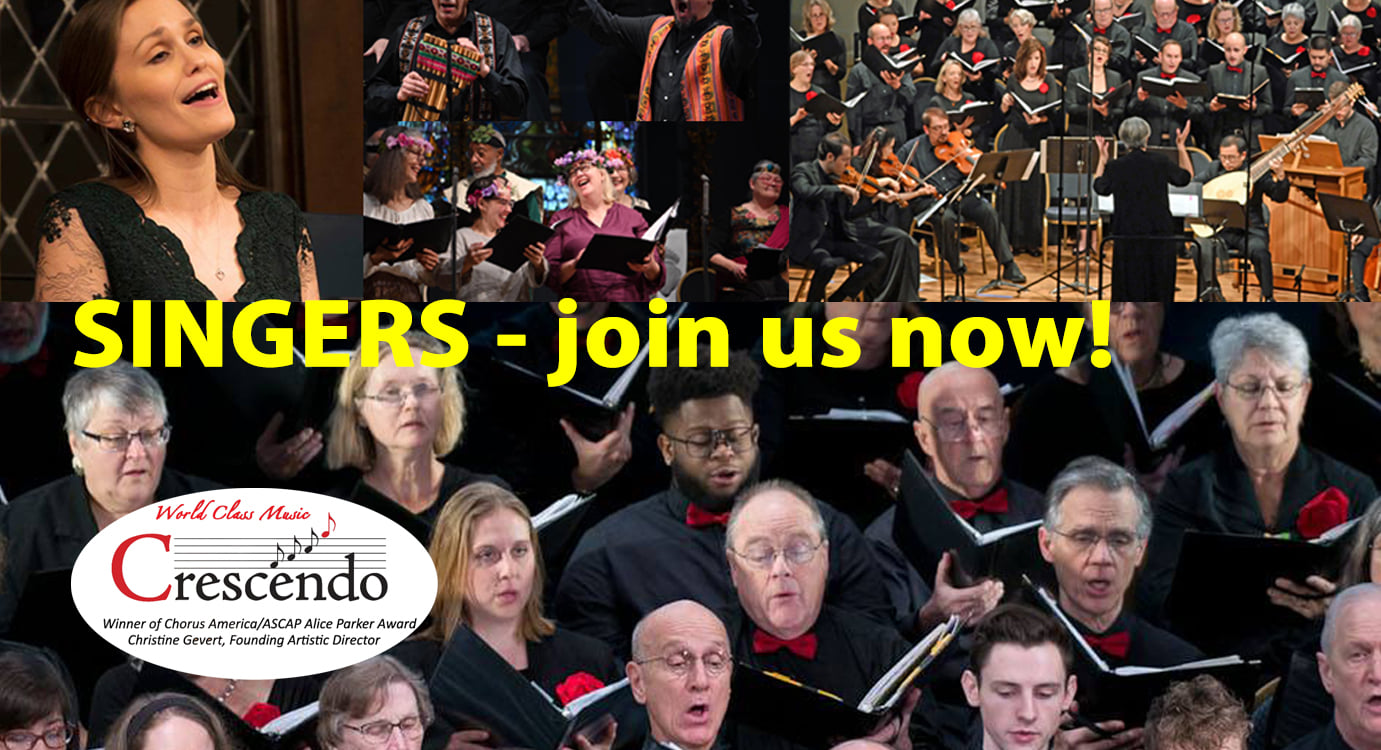 SINGERS based in the Berkshires are invited to join Crescendo’s Ensembles: Crescendo Chorus, Crescendo Vocal Ensemble, Crescendo Young Artists Program. We have openings for both amateur and paid professional positions in all voice groups. A limited number of scholarships are available. We regularly perform in Lakeville, CT and Great Barrington, MA. Learn more, and schedule and audition by writing to: crescendo@crescendomusic.org